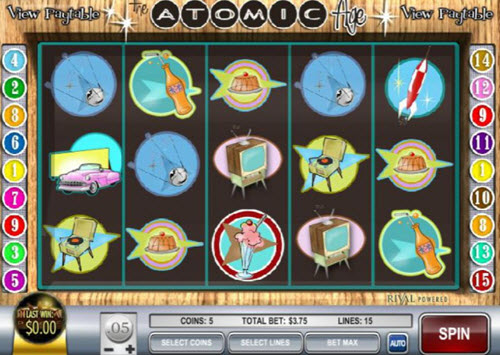 Whenever you want to play Atomic Age Slot, you will see a short introduction video. The video includes a pink Cadillac in motion to the moon. This video play while the slots loads. Atomic Age Slot design captures life in the 1950s and 1960s. Atomic Age Slot is filled with a lot of elements that are known to be in vogue in the 1950s and 1960s. Some of the elements present in the game are the old wooden TV set which serves as where the reels in the game are set. This aforementioned element is accompanied by lots of more old elements.

Talking about the game’s bonus, the game had two main bonus games. These bonus games come in between the main game. It allows you to take a short break from the main game itself. The bonus games fill this break of yours with a brief, intresting, and rewarding game. The two bonus games, however, are different from each other. One revolves driving into a cinema for a date. The other revolves around picking up some food items, these food items are food items that are popular in the 1950s and 1960s.

The slot game has a simple and easy to navigate design. There are circular symbols that are arranged closely to each reel. In total, the Atomic Age Slot has 5 reels.

One of the many advantages of playing or considering playing Atomic Age Slot is because of its paylines. As opposed to other casino games, Atomic Age Slot has only 15 win-lines, this, in turn, gives you the opportunity to larger winnings than slot games with 40 lines or above.

Another advantage you benefit playing Atomic Age Slot is that it gives you the liberty to select the number of lines, coins or the coin size that you want.

The wild that offers the biggest winnings is the UFO wilds. The UFO wilds make you win an ample prize of 7500 coins with just 15 coins. In order to win 7500 coins, you will need to land 5 UFO wilds. You will still stand the chance to win up to 1500 coins if you land 4 UFO wilds.

The UFO wild can replace any regular symbol on the reel to create a winning combination. The two symbols that UFO wilds cannot replace are the Pink Cadillac bonus symbol and the Cash register symbol. Other symbols in the game include an atom symbol and the space ship symbol. Both of these symbols have a matching prize of about 500 coins if you land 5 of them. The prize goes down drastically to 25 coins if you land 3 of the symbols.

Some of the other elements present in the game are a record player, a satellite, TV set, bottle of soda, plate of jello (jelly). Each of these elements has its own prizes attached to them.

Atomic Age Slot brings back the old feeling to the players. Looking at the game’s bonus games, the player gets to go on a date with someone. You as the player will land yourself a date as soon as you have at least 3 pink Cadillac symbols on the reels. As said earlier, the game is short and packed with fun and maximum entertainment. The game allows you to choose a character either men or women after which you will go to the cinemas with your date the success of your date will determine your winnings.

The Cash Register can be said to be a shorter version of Date Night. In order to play the Cash Register bonus game, you will need to land at least 3 cash register symbol on the reels. After this, the game will take you to two shelves packed with different types of food. Your mission is to pick 4 different foods. The values of the food itmes, however, will be calculated by how close their prices are to $1.50c.

One thing that Atomic Age Slot does not have is a well detailed graphic design. This is because the Atomic Age Slot is one of Rival Gaming old game. The game, however, has a short and engaging video at the beginning of the game. The reels of the game are fashioned in an old way.

Nothing beats the deliberate old style that Rival Gaming projects in Atomic Age Slot. The guess is because the developer was able to paint the feel of the ‘50s and ’60s in their game. The fusion of the buzzing of the old TV’s set and the plain and archaic graphics bring back a rush of old memories.

Wrapping Up: Will the Atomic Age Slot be Blast for You?

As we said earlier, the slot game is different from all other Rival Gaming games because of its old and simple design. In addition, the game itself is very simple to learn and easy to play.

Atomic Age Slot also has different rewarding symbols that can make the game an endeavor full of rewards. The game is for older players who want to reminisce about the good old days. Also, the game is for younger players that are fascinated about the ’50s and the ’60s and would love to learn more.